An original sketch drawn in the front cover of one of my sketchbooks.

Within each page of Cricket's Crowd Sorcery character spreads was the name of a character who would eventually appear in the story "The Girl Who Writes the Future." Coincidentally, I didn't happen to draw any of the winning characters until after they were chosen. Did you guess which characters made it into the story?

Even though the sketches of these characters would not be printed in Cricket, I wanted to carefully develop each one since I knew I would be painting them many times throughout the course of the story. As I mentioned in my first Crowd Sorcery characters post, taking the time to sketch each character also helps me understand who they are – what type of clothing they might wear, their mannerisms, how they might react to a challenge, etc. – all of which help create engaging illustrations by including subtle cues the viewer can pick up on and then, in turn, develop their own understanding of the characters. I've referred to my pages of drawings each time I've started working on a new chapter of "The Girl Who Writes the Future," so the preliminary development work definitely came in handy!

"Many people would call it a gift to write as well as Fable. To her, it is a curse. Whatever she writes becomes true."

Fable has an amazing talent, but it's one she doesn't think she wants. Because she fears her mysterious ability I wanted to draw a girl that looks smart and empathetic but reserved and unsure of herself. It took a while for me to nail down exactly what felt right about Fable, including the combination of her facial features and expression. The little asterisks indicated to my art director the sketches I felt were going in the right direction.

"The only child of the mysterious Booksmith, she is raised by the Silent Sisters in the library and holds in her possession the Book of Shadows, which has the power to control all knowledge ever written."


The image says it all: it did not take me long to develop Araceli Luminè.  Luminè's creator gave us a vivid, detailed description of the character and she quickly emerged from the shadows of my imagination.

“The spirit of a wicked sorcerer who was killed in a huge battle that wiped out his monsters, he lives in a huge, ancient cave—a shrine for worshipping Mael-Koth, the pagan god of death.”

Khaos can take on many forms. So far I've only depicted him as a shadowy figure. I don't want to spoil his appearance before his true form is revealed in the story. For now, he is hidden, even from me!

"The Girl Who Writes the Future" by Frederic S. Durbin is currently being published in Cricket Magazine. To follow the adventures of these characters, pick up some issues at the bookstore or see the instructions for downloading the digital editions here.

Kiri Østergaard Leonard is a fellow illustrator interested in the world of myth and folklore. She has created an interview series that focuses on women working in the fantasy illustration field and she recently contacted me about participating. She asked many interesting questions and patiently waited for my answers.

My interview is now available to read on her website here.

Click here to see the rest of the interview series.

Thanks again for the opportunity, Kiri!
Posted by Emily Fiegenschuh at 7:34 PM No comments:

The Book is Back!

The Explorer's Guide to Drawing Fantasy Creatures is finally back in stock online. If you had been waiting, go buy one now! 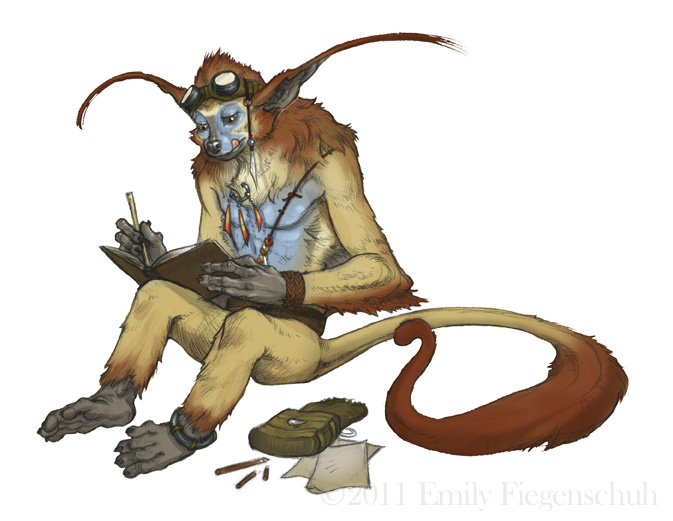 The last Crowd Sorcery character post is coming soon...
Posted by Emily Fiegenschuh at 3:38 AM No comments:

And now for something completely different – the Crowd Sorcery Fantasy Dictionary.

In addition to characters, readers participating in the Crowd Sorcery project were encouraged to submit ideas for a Fantasy Dictionary: objects, places, creatures, concepts, and expressions that could be used in a fantasy story. The kids were inventive – some even came up with insults in an imaginary language!

Since it's harder to convey something intangible like a concept or slang with simple sketches, for this round I decided to focus on drawing objects. I approached the sketches as though I had been asked to design item icons for a role-playing game.

Senwilke: A warm drink which gives whoever sips it the power to fly.


Sesf: An ember used by water people to make fire in water with magic.

Which characters were eventually selected to appear in "The Girl Who Writes the Future?" Stick around for my next post to find out!

Edited to include an introduction to the post. Before it sounded pretty awkward!
Posted by Emily Fiegenschuh at 12:00 PM No comments: