Today is the last day of Emerald City Comicon 2014! A con report of some sort will follow shortly. If you'll be at the convention Sunday, please don't forget to stop by our table N-10, located near the back of the exhibit hall.

Email ThisBlogThis!Share to TwitterShare to FacebookShare to Pinterest
Labels: ECCC

My Painted Marsh Nymph illustration will be printed in ECCC's limited edition Monsters and Dames 2014 Art Book. If you buy the book (available at the ECCC Merchandise booth), stop by our table and I'll be happy to sign it for you. The proceeds from the book go to Seattle Children's Hospital. 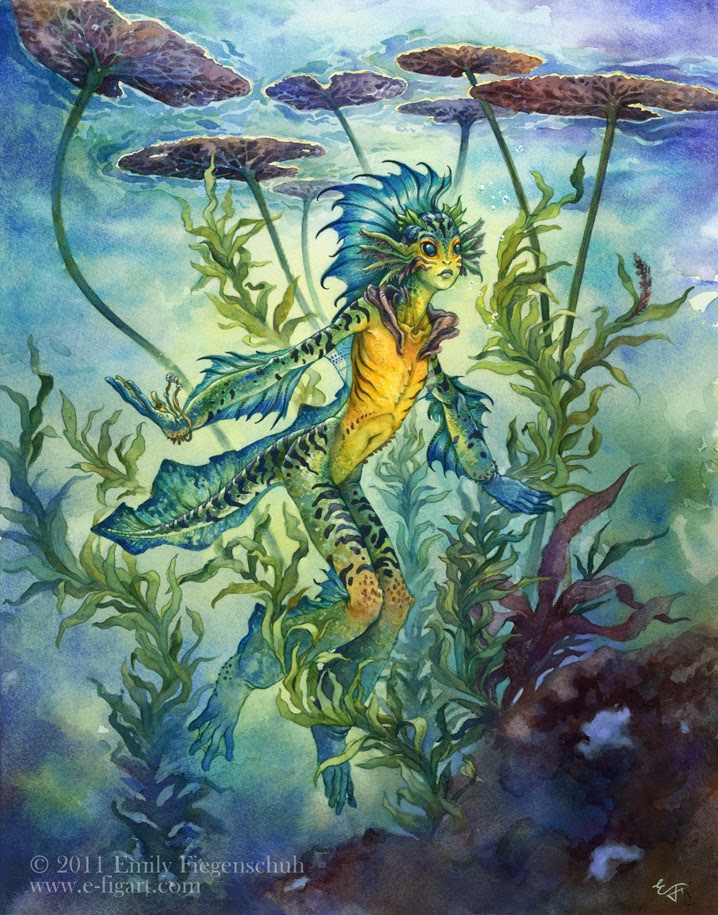 Posted by Emily Fiegenschuh at 7:14 PM No comments:

This year's Emerald City Comicon (or its fun to say abbreviation, ECCC) is only two weeks away!

Last year, the show was huge and had even expanded into the Sky Bridge, the wide hallway that connects the two sections of the exhibit hall. This year the show is even bigger, and as of Thursday, March 13th, it is completely sold out. It looks as though the exhibit hall has expanded even further into Level Three of The Conference Center, which is part of the Washington State Convention Center (and the location of GeekGirlCon in the fall). Please refer to the map for all the confusing details!

There is an important note I'd like to make: there are now essentially THREE Artist Alleys. Please make sure to visit them all! Last year there was some confusion about the location of all the artists, and many attendees said they were unaware Artist Alley was split into two sections.
As you can see on the map, one is on Level Four closer to the entrance of the Washington State Convention Center and the other is through that aforementioned Sky Bridge in the second, larger section of the exhibit hall (where most of the exhibitor booths are located) near the back of the convention center. It looks like the new, third section of Artist Alley is located below the main exhibit hall floor on Level Three of The Conference Center.

The show will be open longer this year, too. Friday is now a full day, with show hours from 10 am to 7 pm. It's gonna be a long day for those of us working the floor! (Come by and be nice to us!)

Vinod and I will be sitting at booth N-10 in Artist Alley, not too far away from our location last year. We're against the wall near the bathrooms, so hopefully we'll be easier to find in the crowd. I'll have most of my usual product available: copies of The Explorer's Guide to Drawing Fantasy Creatures, posters, prints, note cards and sketchbooks. They won't fit on the table, but I plan to bring some original paintings to sell, so if you're interested in seeing what's available, please ask.