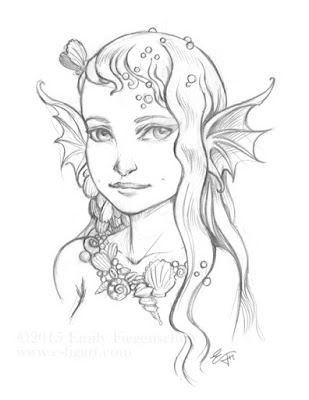 It's your last chance to get my new sketchbook at 10% off! The sale ends this Wednesday night, September 30th. Don't worry –– even if you miss the sale, you always get an original sketch in your book!
Posted by Emily Fiegenschuh at 10:00 AM No comments: 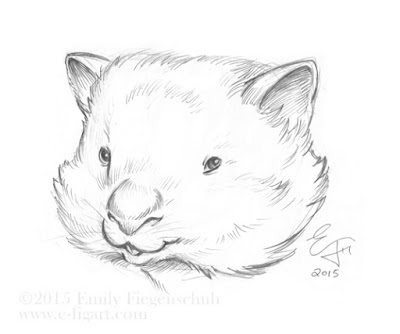 If you don't like wombats I'm not sure we can be friends.
Posted by Emily Fiegenschuh at 12:00 PM No comments:

Emerald City Comicon is getting bigger every year. In 2016, ECCC starts on a Thursday, making it a four-day show for the first time. Passes for the con have started to sell out earlier each year, and for the last couple of years they've sold out well before the start of the convention. If you're thinking about attending ECCC in 2016, get ready! Tickets go on sale at 12 PM Pacific this Wednesday, September 23rd. I'm happy to report I'll be back at Artist Alley. Hope to see you there!
Posted by Emily Fiegenschuh at 2:21 AM No comments:

When in Doubt, Draw an Elf 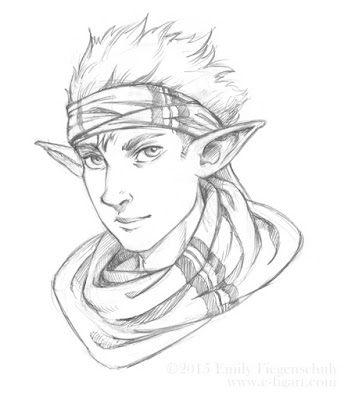 A recent sketch drawn in a copy of my new sketchbook, Fabled Earth.
Don't forget, the 10% off sale (and free shipping for Gen Con customers) ends in two weeks!

Posted by Emily Fiegenschuh at 10:25 AM No comments:

Just because it's The Wasteland, it doesn't mean that people can't make beautiful things.


A few years ago, I discussed an exhibit displayed at Seattle's EMP Museum about the movie Avatar from the standpoint of fictional world-building. Last week, Vinod and I sat down to watch the extras on our Mad Max: Fury Road Blu-ray, looking forward to similar insights into the world of Mad Max. Though we were disappointed there was no audio commentary for the film, the making-of featurettes were very interesting. They did a great job showcasing the thoughtful attention given to the creation of a post-apocalyptic dystopia that both expands and builds upon the world imagined by George Miller and Byron Kennedy beginning with the original film and continuing with my favorite of the series, Mad Max 2/The Road Warrior. My favorite featurette was Tools of the Wasteland, which covered the creation of the costumes and props.

When director George Miller says,"When you're trying to create a world that doesn't exist, you have to have some very solid ground rules," he succinctly points out what it is that sets sci-fi and fantasy movies with plausible worlds apart from those that fail to successfully immerse the viewer. You can extend the same train of thought to world-building in any creative medium. If the audience asks too many questions about aspects of the world that don't feel authentic, the illusion collapses.

Another great series of videos was released with the Blade Runner 5-disc "Ultimate Collector's Edition" DVD and "Complete Collector's Edition" Blu-ray sets. (That's a mouthful!) The feature-length documentary Dangerous Days: Making Blade Runner covers almost everything from the writing of the script to the concept art (see Syd Mead's incredible paintings in the video below) to the fraught production of the movie itself. Additional featurettes examine graphic design and costuming. So much attention to detail went into the creation of 2019 L.A. that artists working on the film even invented magazines about weird future subjects, illustrated the covers, and stocked them at newsstands barely seen in the background during street scenes. This is the dedication needed to build the kind of depth the best fantasy and sci-fi can offer. There's a reason both Blade Runner and the Mad Max movies have had such a massive impact on sci-fi visuals and filmmaking.

I encourage anyone interested in creating a believable (and beloved) fictional world to look for these making-of films. Please keep in mind these are featurettes for R-rated movies, so view at your discretion.

Do you have any favorite "making-of" featurettes or documentaries? Share them in the comments!

Posted by Emily Fiegenschuh at 11:34 AM 2 comments:

Email ThisBlogThis!Share to TwitterShare to FacebookShare to Pinterest
Labels: inspiration 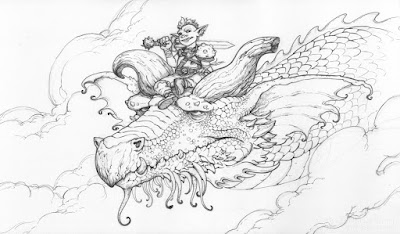 At Gen Con this year I was asked to do a playmat commission by a satisfied customer for whom I had done a smaller playmat sketch years ago. I accepted with a bit of trepidation. Playmat sketches combine a couple of art fears of mine: inking, which I don't do often enough, and the inability to erase or otherwise cover up mistakes.

I started with a rough pencil sketch and then used Micron pens in sizes 005, 01, 03 and 05 to complete the drawing. It turned out to be a fun challenge and I enjoyed working on it. And luckily my customer was satisfied once again!

Posted by Emily Fiegenschuh at 5:14 PM No comments: