Check out the Holiday Sales at Fabled Earth Art! 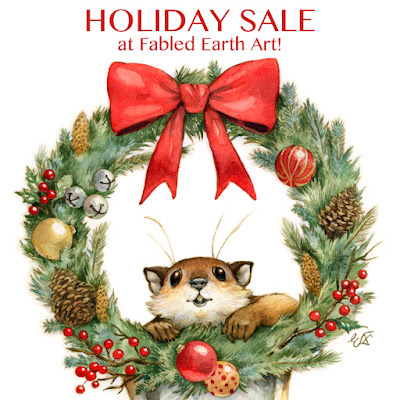 Recommended order cut off times for the holidays:

I will do my very best to get gift items packed and shipped in time to arrive by December 25th. Please order early to help insure that it gets there and everyone is happy. Shipping times within the United States are usually more predictable than shipping times for international orders, so please understand that I cannot guarantee delivery by a specific date.

Posted by Emily Fiegenschuh at 6:51 PM No comments:

For those of you still following me here I have an important announcement to make: I have had to cancel my appearance at the Gen Con 2016 Art Show due to a pet-related family emergency. I'm very sorry that I won't be at the convention this year. I will miss catching up with friends and fans and I'm disappointed I won't get to see what the artists in the show have been working on all year. I will also miss the convention itself – roaming the bustling exhibit floor looking for hidden treasures, enjoying the elaborate costumes people have put together, even briskly navigating the crowd – it's all part of the con experience.

If you were planning to stop by my table, I'm sorry I won't be there this year, but I hope to see you again at a future convention! Thank you for your support and your interest in my artwork!
Posted by Emily Fiegenschuh at 11:30 PM No comments:

For the next two weeks, everything in my Etsy shop will be 15% off! Just enter coupon code SUMMERSALE upon checkout to receive your discount. Sale ends July 4th.

I'm also holding a clearance sale on my 11 x 14 inch prints. The sale includes prints I currently stock and a couple I've never listed on Etsy before. If you buy any of them during my Summer Sale, you'll receive the 15% discount on top of the listed clearance price! Get these while they last –– after they're gone I will no longer be making prints at the 11 X 14 size!

Posted by Emily Fiegenschuh at 12:35 AM No comments:

Another Emerald City Comicon has flown by. Thanks to everyone who stopped by my table to check out my latest work or simply to say "hello!" I shared some of the sketches I did during the convention on my Instagram account. If you're interested in seeing them, please click that link to head over there, and if you like what you see please follow me! I will continue to update Fabled Earth, especially if I'm making a longer blog post, but for quick posts and images I'll be using my Instagram account more frequently. Thanks for reading, and thank you for supporting my work!

Posted by Emily Fiegenschuh at 7:32 PM No comments: 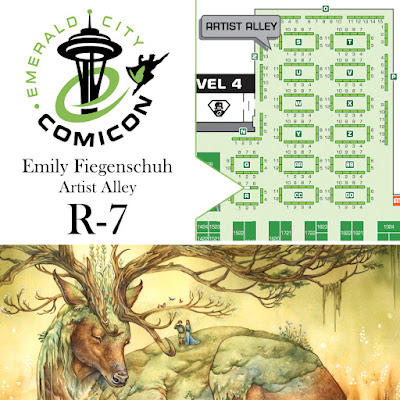 ECCC 2016 begins tomorrow! The convention runs from Thursday, April 7th through Sunday, April 10th. Come see me at Booth R7 in Artist Alley. I will probably be sharing updates and photos on my Instagram. Hope to see you there!
Posted by Emily Fiegenschuh at 9:00 AM No comments:

Once again I'll be exhibiting at Emerald City Comicon in Seattle. This year the convention will run four days for the first time: Thursday, April 7th through Sunday April 10th. My table in Artist Alley is R7. If you've seen me at ECCC in years past, the location is similar to where I've typically been seated. Artist Alley is in the Exhibit Hall on level 4 of the Washington State Convention Center. The back section of the Hall is accessible through the Sky Bridge. Please see the map below:

This year there's a new feature on the ECCC website you can use to look up individual artists. You will find a brief bio and description of their work, their table location, and links to their website and social media. Here's mine.

I finally have a new sketchbook! I've sold a few here and there at gallery shows and online, but ECCC 2016 will be its "official" convention debut. The book is titled Fabled Earth and it's the fourth in my series of sketchbooks. Fabled Earth has a color wrap-around cover featuring a new painting, and 68 pages packed with character and creature designs, rough sketches, finished drawings and even a couple illustrations in full color. In addition to the new book, I'll also have my usual product available: copies of The Explorer's Guide to Drawing Fantasy Creatures, posters, prints, and note cards and maybe even some original artwork.

Hope to see you there!
Posted by Emily Fiegenschuh at 10:00 AM No comments:

Curator Notes on "In Olden Times"

It's the final week of the Arboreal Dreams gallery show at Krab Jab Studio. Julie Baroh, curator and owner of Krab Jab Studio, shared her thoughts about my painting "In Olden Times" on Krab Jab's tumblr page:

Curator’s Note: “Other than the earthy palette used for this piece, content and composition is strong in two ways. For composition, Emily draws the eye through the whole piece by using the moss, antlers and implied vegetation to point the viewer back inwards to the focal point, which is the head of the stag. The viewer’s eye never “falls” off the page."

“This piece speaks to me about our connection to nature, using mythological reference. The stag plays the part of the tree of life, both wild and yet tranquil and peaceful. The figures, male and female, survey the world from their vantage point in medieval attire, as if to note that at one point we had a connection to Earth in its Springtime (note the flowers), long ago. Maybe now it's truly a fairy tale, all but forgotten.”

As an illustrator, my artwork is usually complimented either implicitly or explicitly by an art director for its technical skill or how well it achieved its goal of representing the story or product I was hired to illustrate. It's less often that I receive feedback about the way it has connected emotionally to a viewer. I have the opportunity to discuss my artwork with people at conventions and gallery shows, but I don't often receive such a lovely, in-depth review of one of my pieces.

Sometimes it's difficult for me to explain the meaning of one of my paintings, even though I'm the person that made it. Sometimes I'll get "in the zone" while working and add something to the image that just feels right for it, without any lengthy calculation about why it must be there. This seems to happen to me most often when I start to develop a deeper connection to a particular painting as I'm working, and I attempt to channel that emotion into the work. "In Olden Times" became one of those special paintings.

The best experience I can have as an artist is reaching this emotional connection with a viewer –– a communication without words. I'm happy that Julie picked up on the duel expressions of peace and sadness in my painting. One of the best ways I can think to describe it is a feeling of bittersweet nostalgia.

The last day of Arboreal Dreams is April 2nd. See Krab Jab's exhibition catalog for details and information about the other work on display.

Posted by Emily Fiegenschuh at 7:41 PM No comments:

Group show Arboreal Dreams opens at Krab Jab Studio in Georgetown this Saturday evening, February 13th, with a reception from 6 to 9 PM. Come to the show to see my painting "In Olden Times" in person alongside many other beautiful works of art depicting the forest. Vinod and I will be at the opening reception and would be happy to see you there! For more details about the show and the gallery, see below.

Posted by Emily Fiegenschuh at 6:48 PM No comments:

My first show of 2016 is Krab Jab Studio's upcoming exhibition Arboreal Dreams: a group show featuring artists' interpretation of trees. The show will debut today at the Mythic Worlds Convention taking place in downtown Seattle February 5th through 7th. Then it will move to Krab Jab's Georgetown location where the art will be on display through April 2nd after an opening reception on February 13th from 6 to 9 PM. Vinod and I will each have a new painting in the exhibition and will be in attendance at the reception. If you'll be in the area we hope you'll stop by to view what promises to be a lovely show at either venue!

The press release for the show is below:

Trees have entranced the minds and hearts of man since before our kind could trace time. They served us for food, shelter, clothing, and warmth. They delighted us in their marking of the seasons, their marking of fertile grounds in desolate lands (oasis), and the marking of our own fallen comrades (as a natural headstone). They are featured in every religion, every community, every social structure, mystifying us, strengthening us, nurturing us. And finally, they are often the unsung stars in our artistic endeavors, whether they set the scene for an epic battle of good and evil, or whether they themselves serve us, the artists, in the form of wood blocks, totems, painting panels, sculptures, or paper. Without the mighty tree, we would literally die.

In this group show, artists were asked to explore their own connection to the nature of trees. Whether they hail from the Pacific Northwest or as far as Belgium, these participating artists visually narrate an arboreal song that weaves together almost seamlessly. The result is as ethereal as it is solid, drawing into the depths of our communal consciousness.

"Arboreal Dreams: the Forest" makes its debut this weekend at Mythic Worlds Convention, held at the Seatac Double Tree Hilton from Friday - Sunday, February 5 - 7th. The art room is free to the public and is located on the second floor of the hotel, right above the snack bar. Hours are 12- 6 pm and 12 - 4 pm on Sunday.

This show will run through both February and March, opening February 13th at Krab Jab Studio.