Attending conventions is a fun opportunity to share and discuss my work in person with the rest of the world. The only drawback to occupying a table at a convention is my inability to experience the rest of the show. It can be difficult to make the rounds in an art show even if I manage to show up before the doors open to attendees, I miss out on attending interesting panels, and rarely have the time to shop in the exhibition hall. (Shop was the only thing I did when I started going to comic cons in high school!) I also miss seeing many of the costumes during the convention, but I do manage to catch a few that come through the art show.

Here were some of my favorites: 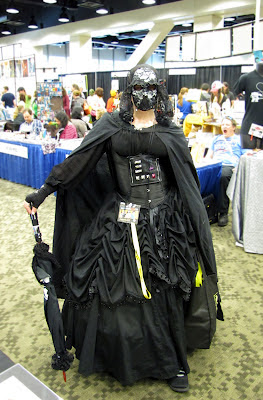 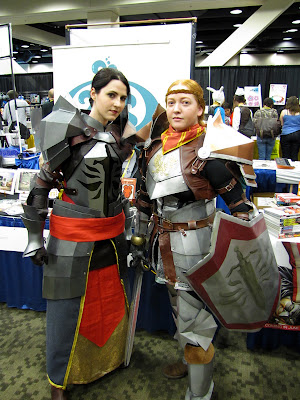 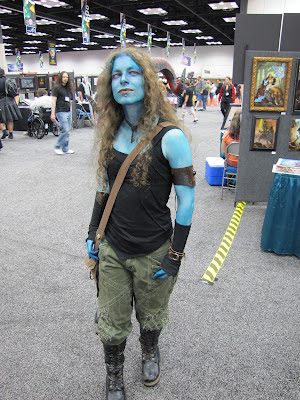 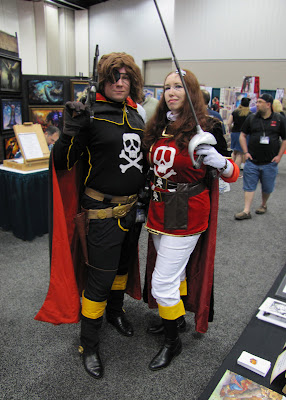 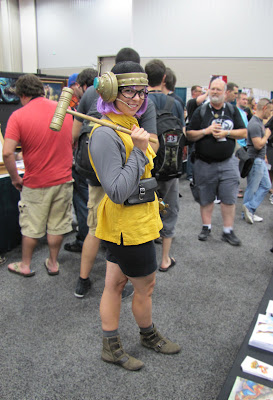 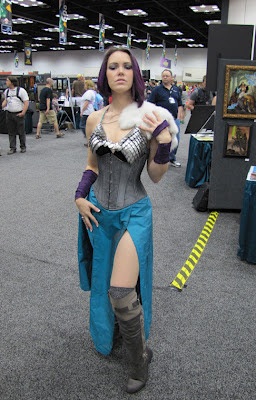 Someone came by my table at Gen Con and asked for a sketch of Savage Dragon on a blank sketch card. I obliged (he is lucky that the random artist he picked to draw this character actually knew who it was and could draw him without reference) but then he never returned to pick the card up. Poor Savage Dragon! I didn't want to throw him out since I did spend time sketching him, after all. Would anyone like this abandoned card? Cover the postage and I will happily mail it to you!*

*Edit: The card has been spoken for and is being shipped free of charge. Thanks!
Posted by Emily Fiegenschuh at 2:37 AM No comments:

I do a lot of sketching at Gen Con in copies of the books I sell, in fans' sketchbooks that are filled with drawings by a variety of artists, and even on some unique surfaces like rubber playmats (used for playing card games) and dice bags.

A few of my favorite sketches from Gen Con (with apologies for the poor digital photos): 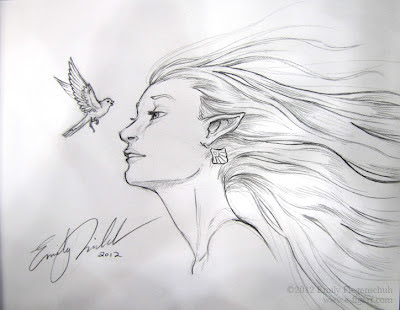 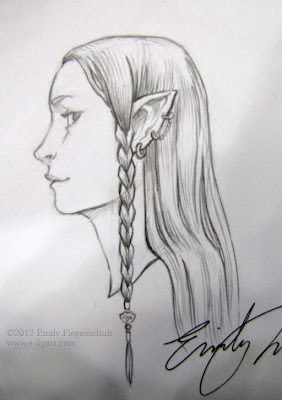 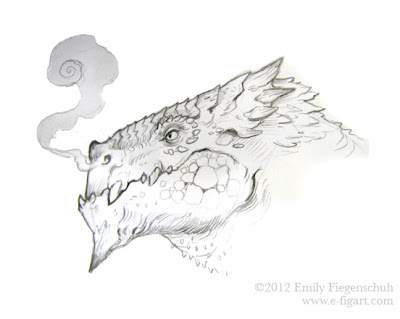 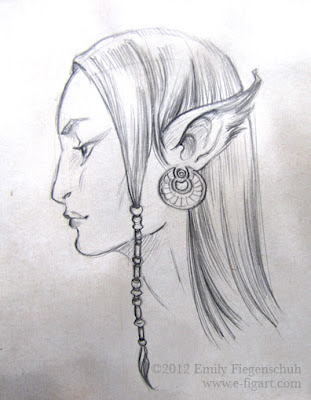 You may have noticed a bit of a trend. Profiles are faster and easier to draw well in a busy convention environment.

Posted by Emily Fiegenschuh at 12:35 AM 2 comments:

Finally, the post you're probably no longer waiting for!


Gen Con 2012 began for us much like Gen Con 2011 did: with little (okay, I admit it was actually no) sleep and an early morning trip to the airport with luggage packed within fractions of a pound of the weight limit full of art and prints. Once the bags were collected in Indianapolis and hefted over to the convention center, setup went like usual, although this year we were setting up two tables; one for me and one for Vinod. The most difficult adjustment we would have to make was running our separate tables alone until our friend arrived on Friday afternoon to help us. 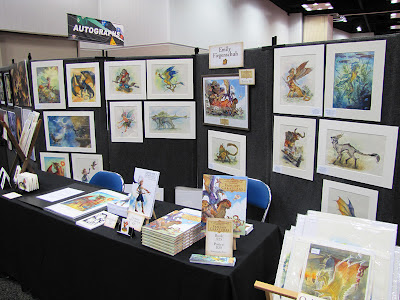 This year our row neighbors were Tyler Walpole, Dan Scott and Scott Murphy. The art show Guest of Honor was Todd Lockwood, a veteran in the field of fantasy art. Todd helped define the look for the characters and creatures of the Third Edition of Dungeons and Dragons. His dragon designs in particular are equally sleek and powerful, visualizing a classic mythological creature with majesty and realism. Those of us who worked on illustrations for Third (and 3.5) Edition D&D became well acquainted with his drawings as we referred to the high standards set by Todd when we made our own dragon images.

The convention began on Thursday, and it was unusually busy for the first day.

On Friday, I had the opportunity to catch up with editors Vanessa Wieland and Christina Richards from F+W Media (publisher of my book under the IMPACT imprint) whom I met for the first time at Gen Con last year. Christina edited The Explorer's Guide to Drawing Fantasy Creatures.

Friday evening after the exhibit hall closed all of the artists gathered for the annual art show reception where we were finally able to mingle after a busy couple of days at the convention center. The reception wraps each year with the announcement of the Gen Con art show award winners in several categories. Imagine my complete surprise when it was announced that Guest of Honor Todd Lockwood, Wizards of the Coast art director Jon Schindehette, and last year's Best in Show winner Scott Murphy had selected my work for Gen Con 2012 Best in Show! What an honor! 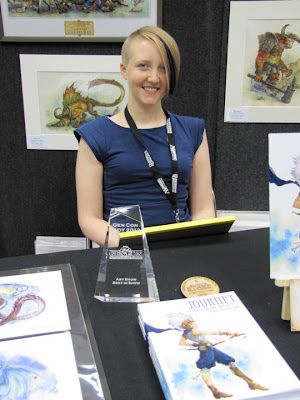 Cool-looking crystal trophies come with responsibilities. Next year I will be joining the Gen Con 2013 art show Guest of Honor and an as-yet unnamed art director to judge the 2013 art show awards. Gulp!

Good news continued during the remainder of the convention. The Explorer's Guide to Drawing Fantasy Creatures was once again a hit after a slow start on Thursday and Friday. All but one of the books I brought sold. My sketchbook, Journey, also did well this year with a record twenty copies sold. I was also happy to have sold several original paintings. It's always a plus to go home with lighter suitcases and fewer boxes to ship! Table traffic on Saturday and Sunday was almost overwhelmingly busy, so I apologize to anyone who stopped by and did not have the chance to chat with me or otherwise get helped in a timely manner!

Thank you to art show coordinator Barbara Fisher and the rest of the Gen Con staff, all of the artists, attendees, friends and everyone else who helped to make Gen Con 2012 our best show yet! Can't wait to see you next year!


Posted by Emily Fiegenschuh at 1:01 AM No comments: