The last few characters I sketched for Cricket Magazine's Crowd Sorcery project were sidekicks. Once again there were some wonderful submissions, but I was only able to illustrate two. Space was also needed in the double-page spread for drawings of Fantasy Dictionary words, which I'll share in my next post.

Kitara is described as a descendent of Medusa who has a deadly crimson eye that turns people to stone when she looks at them.

The creator of Rax wonderfully conveyed his dashing personality in a brief story paragraph written as part of Crowd Sorcery's character creation exercise. It was (almost) easy to transform him from that vivid first impression into a tangible drawing.

I wanted to vary the illustrations that would be published in this issue, so I decided to submit at least one complete sketch as opposed to a bunch of loose sketches of faces. Luckily, I only needed one or two quick development sketches of Rax's face before I was happy with it, but I did play with a couple different hairstyles on a piece of tracing paper. This drawing isn't as clean as the one I posted of Aciere Steele last week, but I like the gesture and the balance between rough and polished lines.

Check out next week's Fantasy Dictionary post to see the sketches as they appeared in Cricket.
Posted by Emily Fiegenschuh at 12:00 PM 2 comments:

The next group of characters I sketched for Cricket Magazine's Crowd Sorcery project was the villains. There were dozens of interesting submissions, but my schedule only allowed time to realize a few. Sketching Cricket readers' characters is a project I would have loved to spend months upon months doing, had I months upon months to do it!

I was so excited about many of these villain characters and was personally rooting for a couple of them to to be chosen when the time came to cast votes for the antagonist that would appear in the story. Alas, my favorites did not come out on top, but at least I got to draw them. (And regardless of whether they "won" or not, their creators should be proud to have brought them to life.)

Aciere Steele comes from a world with a magic vs. technology theme. I really wanted to draw Aciere Steele! I drew a bunch of heads, but I felt compelled to move onto a detailed drawing, because she's essentially a steampunk cyborg and how could I not draw a steampunk cyborg? I so badly wanted to make sure I finished the drawing that I took it with me on vacation and worked on it late at night in our hotel. A good friend we were visiting whom I hadn't seen in years even came with us while I took a terrible scan of the drawing at FedEx/Kinko's! Luckily, I was able to scan it again when I got home, and the high-res version made it into the magazine. Whew!


Even though I love sci-fi stuff, I don't draw it often, so I was a bit nervous about my ability to design some cool robotic parts that didn't look like "traditional" Victorian Era style steampunk. I was aiming for a more broadly defined fantasy version of steampunk that also wasn't too high-tech. I hope I succeeded.

Margaret O'Shanahan, the defiant pirate with an enchanted ship that can soar through the sky, took second place in the villains poll.


There were quite a few animal characters submitted in all categories. There were several I liked and I wanted to make sure I drew at least one of them. 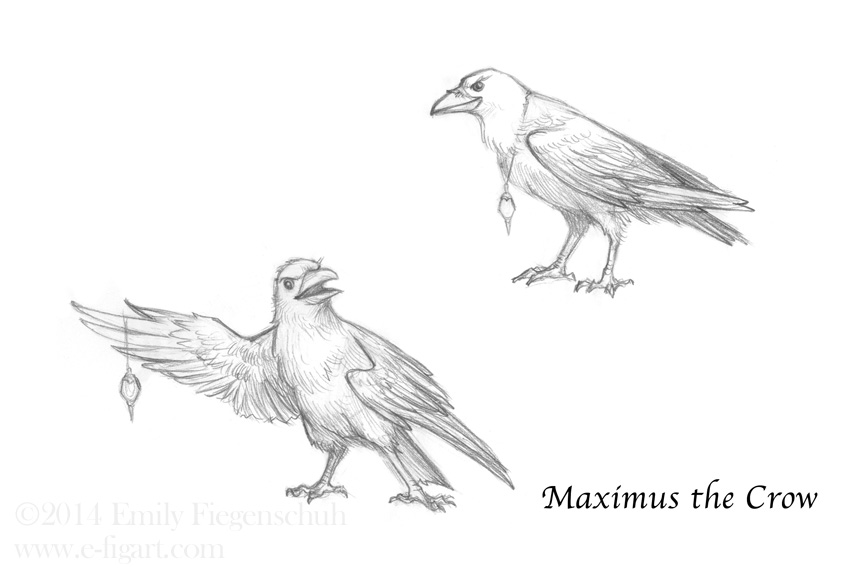 Stay tuned for the sidekicks!
Posted by Emily Fiegenschuh at 7:59 PM No comments:

Earlier this summer, while readers were still generating scores of amazing characters for Cricket Magazine's Crowd Sorcery project, I shared one set of sketches I had done of a submitted character: a young girl named Minna of Afting, who was raised by gigantic birds.

Now that Frederic S. Durbin's Crowd Sorcery story "The Girl Who Writes the Future" has begun and many of the character submissions have been published, I thought I'd share all of my sketches.

First up are the heroes and heroines. Brief summaries of their background or abilities can be found in the image of the Cricket spread at the bottom of this post. Many kids wrote fascinating paragraphs-long biographies describing their character's personality, background, talents, fears and hopes.

Any time I begin a character design I start with the face. If I don't get the face "right," meaning a look that matches the character's essence as I see it in my mind, I can't convince myself to move on with the design. Sometimes it took me a while to get a face or expression that felt correct to me, so given my time constraints some characters did not progress past portrait sketches.
Fionn Pierre Nelson was the last character I worked on in this set, so I only completed a few face sketches. 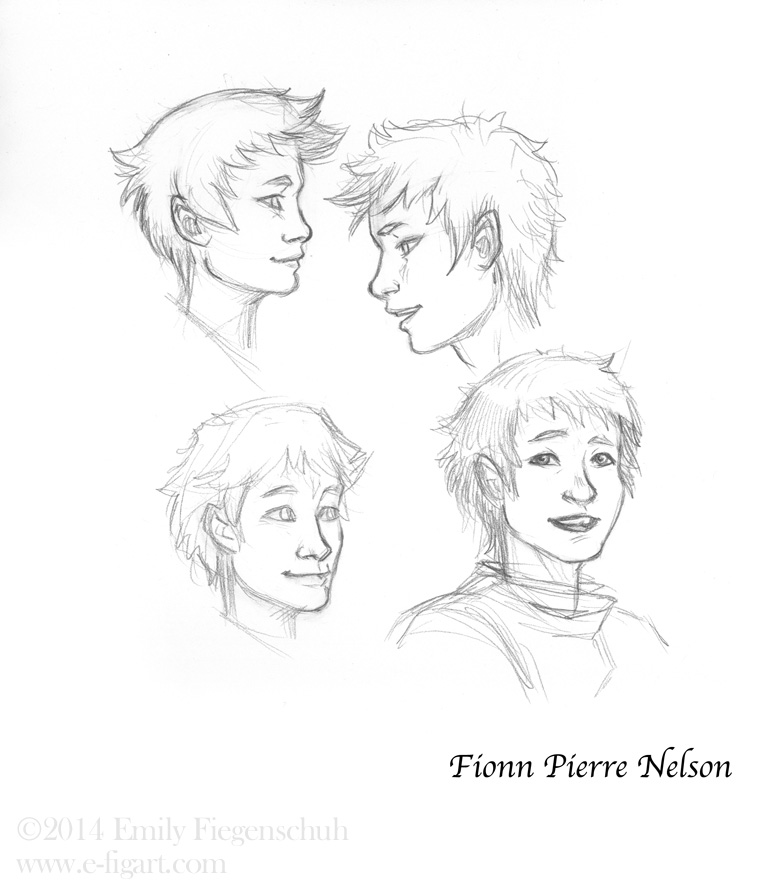 Listette takes on the familiar "raised by animals" theme. I wanted her to have somewhat sharp, angular features, and I carried that through to her hair. Her creator described her as wearing wolfskin, so I included a few very rough doodles of costume ideas. It was hard not to be influenced a little by San from Princess Mononoke, but I tried to avoid doing anything too similar.

Will Gust is a fun and lively character that I was sorry I didn't have time to develop further. I guess I actually felt that way about all of the characters. If I had my way, I would have liked to make something like a model sheet for all of them.


When I turned the drawings over to my art director, I indicated a couple of my favorites of each bunch and she picked from those for the print edition of the magazine.

This post has been edited for clarity and to add a link.
Posted by Emily Fiegenschuh at 12:00 PM No comments: