I've been plastering my blog and website with images of my book's cover for a few weeks, so I thought it was time to share the full, wrap-around cover illustration. Much of the left side of the illustration as printed on the back of the book had to be covered by necessary copy. Even so, it's a fun design, and I'm happy with the way it turned out.

In other news, it appears my book is now in stock and ready to ship at Amazon.com and my publisher's online store, NorthLightShop.com! I added a link to purchase my book at NorthLightShop.com on the sidebar of my blog. I will also be making signed copies available for purchase at my website once I return from Gen Con.

And please stay on the lookout for The Explorer's Guide to Drawing Fantasy Creatures in brick and mortar stores. If your favorite bookstore or arts and crafts store does not carry it, please consider asking them to!
Posted by Emily Fiegenschuh at 7:13 PM 1 comment: 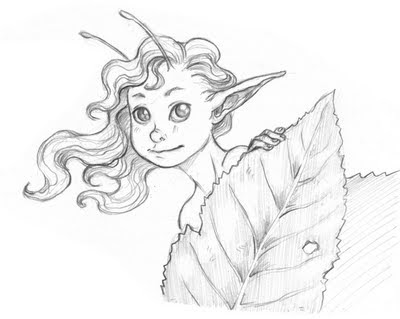 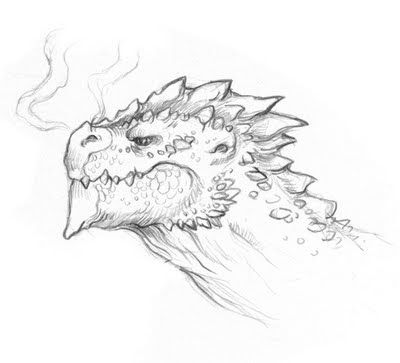 Just a couple sketches I did for people who bought my volume three sketchbook, Journey. I'll probably be doing a lot of these at Gen Con next week!
Posted by Emily Fiegenschuh at 4:39 AM No comments:

I never get tired of this joke.
Posted by Emily Fiegenschuh at 7:24 PM No comments:

Email ThisBlogThis!Share to TwitterShare to FacebookShare to Pinterest
Labels: stuff 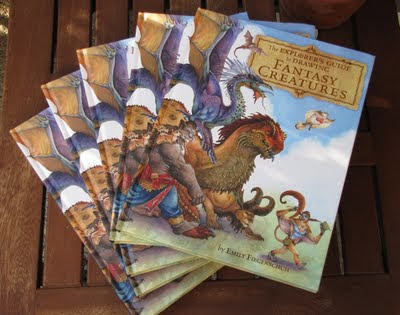 My copies of The Explorer's Guide to Drawing Fantasy Creatures have arrived! That means that they will be appearing on store shelves within the next two weeks. When I return from Gen Con, I will be making signed copies available for purchase through my website, e-figart.com.

Click here for a look inside the book.
Posted by Emily Fiegenschuh at 8:22 PM 5 comments: 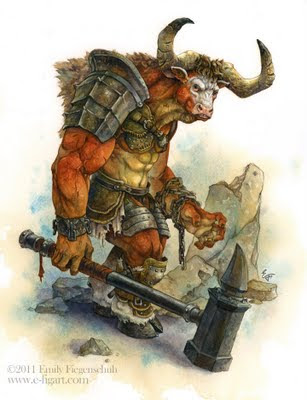 The finished painting of the Minotaur from The Explorer's Guide to Drawing Fantasy Creatures. See the drawing here.

Posting may be light the next couple weeks as I prepare for Gen Con. I'll be sure to post some updates from the show!
Posted by Emily Fiegenschuh at 11:41 AM No comments:


Over the Fourth of July weekend, Vinod and I visited the EMP/SFM (translation: the Experience Music Project/Science Fiction Museum and Hall of Fame) in Seattle Center to see the Avatar Exhibition. The collections are housed in a Gehry-designed building that looks a lot more interesting up close with its varying colors and textures of metal than it does at a distance, from which it looks like a smooshed blob of Play-doh. The Science Fiction Museum normally contains a collection of historically important science fiction books along with a timeline of the development of the genre in various media, as well as props, production art and costumes from science fiction and fantasy movies and TV shows. The first time we visited I had hoped to see the alien queen from Aliens, but apparently she's either away for repairs or was blasted out of an airlock.

For the Avatar exhibit, they must have moved out all the usual displays to make space for the installation, which they modeled after some of the sets from the movie.

While I'm not particularly a fan of Avatar as a movie, I was impressed by the special effects, and like many other artists I appreciated the thought and time put into the character, environment and creature designs. When creating a fantasy or science fiction world, it's important that the world feels plausible, and the people who worked on this film did an excellent job immersing the viewer in the world of Pandora.

There are many things to take into consideration when building an imaginary world. Artists need to keep in mind what they want to say about their world, and how to keep things realistic and consistent within the rules of the world they have set up. When developing a fictional world, an artist should consider:

• how to make the world look lived-in
• keeping the look of items, clothing and technology consistent across certain cultures or groups
• how items are made and from what
• how and for what purpose items are used
• adaptations of both humanoid and non-humanoid creatures and how those adaptations allow them to fit into their environment
• how creatures or people use, shape or change their environment 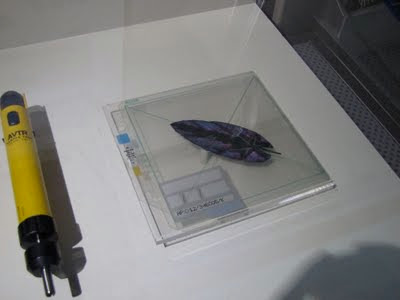 One of the most innovative parts of the exhibit was an interactive installation consisting of a large horizontal touchscreen that mimicked the screens people used in the movie. A series of coaster-like plastic cards could be placed on the screen to activate images of production art such as the design of the Na'vi, creatures of Pandora, etc. This was my favorite part of the exhibit and I wish there had been more installations like this showcasing the production art rather than the gimmicky "Take a picture of yourself next to these giant shoes!" stuff they had.

We were pleasantly surprised to see a Spinner from Blade Runner on our way out of the museum. Somehow we missed it on our previous visit. 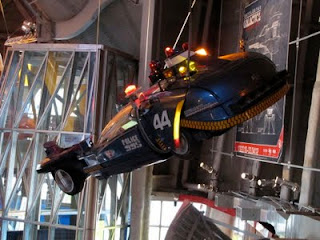 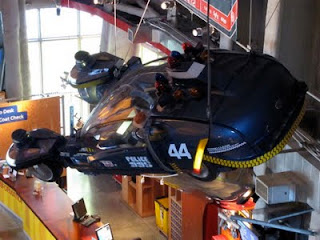 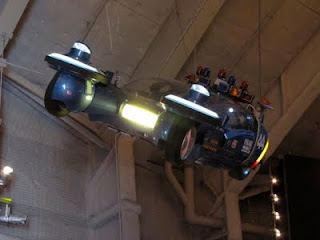 For pictures of the Avatar exhibit space and additional information, check out the museum's Avatar Exhibition webpage.
Posted by Emily Fiegenschuh at 3:46 AM No comments:

One of the most important things I learned during my time as a product designer was how to create clean, concise drawings.

There is nothing inherently wrong with loose drawings. In fact, many artists create incredibly beautiful sketches that look effortless. When I look back at my older drawings from art school and before, however, I notice some of the sketchy lines in my work were due to hesitancy rather than confidence. I would often leave lines alone that should have been better defined, or fail to clean up unappealing "chicken scratch" that did not inform the drawing. When I worked in the 2D art department at The Franklin Mint, I quickly learned the importance of tightening up my work so that the next person down the line could read it and do their part to turn it into a product. I grew a lot as an artist in the year and a half that I worked there, and due to the sheer number of drawings I produced, my draftsmanship improved quickly.

One of the techniques I learned while working there was how to clean up, alter or refine a drawing using layers of tracing paper. This idea might seem antiquated since you can do the exact same thing with layers in Photoshop, but many of us in the studio still worked primarily traditionally. Despite becoming much more adept at Photoshop in recent years, I continue to frequently use this technique. The benefit is the ability to scribble out a lot of ideas without losing the original sketch or making a mess of it by erasing and re-drawing over and over again. Instead you clean it up in steps as you layer tracing paper over the top of each previous drawing. 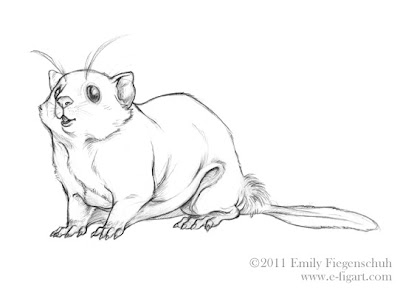 I employed this technique when I wanted to make a simplified, cartoony version of the pancake glider (a platter-sized flying rodent) from my book The Explorer's Guide to Drawing Fantasy Creatures. While this is most useful when working with a really complicated design, I sometimes still use it for simpler ideas such as this. I started with some roughs. The most important thing I wanted to get across in this drawing is the pancake shape of the flying critter. 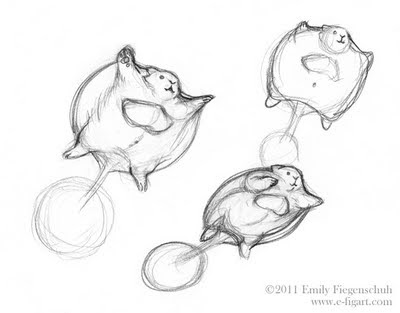 I blew up the rough I liked and printed it out, grabbed a piece of tracing paper, and layered it over the top to begin sketching out a more refined version of the rough sketch. I wanted to take this more realistic interpretation: 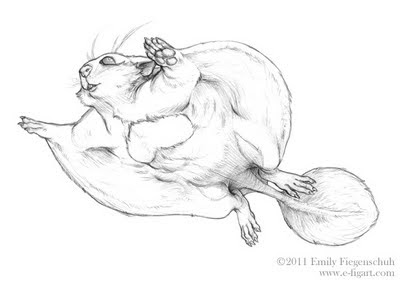 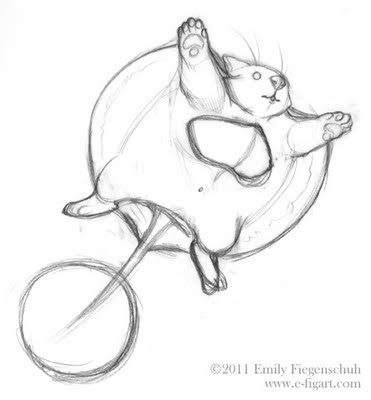 Much like someone does when creating a caricature, I reduced the detail down to simpler shapes that emphasized the most essential qualities of the pancake glider. My aim was to make it ridiculously cute. 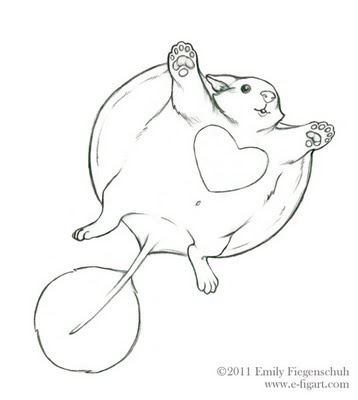 In this final drawing, you can see where I cleaned up and refined the lines and shapes from the previous drawing. I also took the artistic liberty of flipping the shape of the air pouch on his chest to create a conveniently located heart shape. That familiar symbolic shape just seemed right for the image and made it cuter. 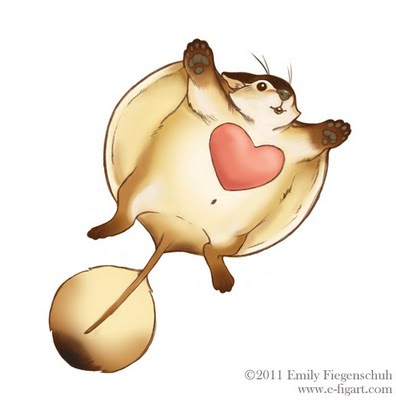 Whoosh!
Posted by Emily Fiegenschuh at 2:01 AM No comments: